Smart Metals That Self-Repair – Is science catching up with science fiction?

One of the differentiating properties of organic matter compared to synthetic materials is that biological material has the natural capability to self-repair.

Every day our body is protecting us from the damage caused by toxins in the food we eat, the air we breathe as well as alcohol, smoke, pesticides, and many medical drugs. We can even heal from acute injuries – human bones generally take 6 to 8 weeks to heal to a significant degree. But don’t think that we are so special, salamanders can regenerate their limbs, heart, tail, eye tissues, kidney, brain and spinal cord throughout life.

The man made materials we use for construction might be much stronger than organic materials but the question is, in the depths of space, with all the potential harms associated with space travel, would it be more effective to have smart materials which can self-repair? Especially if we may be in an intergalactic war? Imagine if isolated machinery and manufactured products that have been damaged by high impact had the ability to self-repair.

In my Sci-fi space opera novel The Black Guard: Quest For The Inviolable Man, much of the futuristic technology are self-healing, such as sensors and soldier’s combat armour. Although it all seems farfetched and outlandish, the technology is already at our door steps.

Beckman Institute have developed a self-healing polymer. Tiny capsules containing a healing agent are embedded in the polymer. When the material is damaged, the capsules rupture and release the healing agent, which repairs the cracks. The damage-induced triggering mechanism provides site-specific autonomic control of repairs. Their fracture experiments yield more than 90% recovery in toughness.

If you think that’s awesome, in 2015, Researchers from the University of Alicante Adhesion and Adhesives Laboratory have developed a flexible polymeric material capable of self-repairing. When the material is cut with scissors in half and put back in contact, it re-joins itself within 10-15 seconds without using any external source. Also, the material has shape memory, which means that even if it is crushed and kneaded, it recovers its original shape in a few seconds. 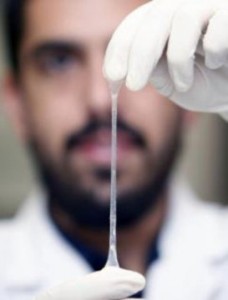 According to UA researchers, “the valuable features of the new material are due to its lack of chemical reaction, which prevents its alteration and turns it into a biocompatible mass that is accepted by the whole body”. The novel material can handle being pierced by a gunshot and instantly repairs the damage.

These engineered materials are mimicking our bodies’ very own regeneration processes. When we are injured, first, blood cells called platelets join together at the cut and form a clot to stop us bleeding to death. The platelets then release chemicals called cytokines into our bloodstream. Cytokines (signaling molecules that act like chemical messengers and play a key role in healing and regeneration) attract the attention of certain cells to start healing the injury.

The University of Michigan has collaborated with NASA, to develop the self-healing “skin” which contains a reactive liquid sandwiched between two polymer sheets. When punctured, a chemical called tributylborane in the liquid reacts with oxygen to make it harden, sealing the hole within seconds.

So science fiction tales set centuries in the future would have to factor in the years of progress in material science research and development in order to be accurate to those current times.

Kas Smith writes science fiction and fantasy. You can find out more about The Legend of the Black Guard Series by clicking here.